At Monster Pest Control, we intend to make you feel secure by protecting your home or business from ants. We are licensed, certified, responsible and specialists in ant control in Miami. Learn more about the different types of ants found in South Florida. 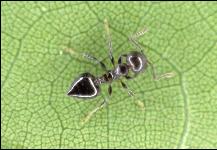 Acrobat ants get their common name from their habit of raising their abdomen over their head and thorax. They occasionally become pests by invading homes where they are known to nest in woodwork and foam insulation, and infest household foods. They feed on live and dead insects, and they tend aphids for their sugary excrement known as “honeydew.” In homes, they show a slight preference for sweets and meats or other high protein foods.

Winged forms or reproductives usually appear in the fall of the year. When these appear inside homes, it is a good indication there is a nest of acrobat ants located inside the home. 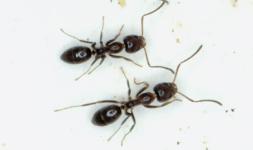 Argentine ant colonies are located in wet environments near a food source. The ant gives off a musty odor when crushed. Argentine ants deposit trails continuously, instead of just from nest to food source. This habit ensures they do not waste time visiting the same area for food. They prefer to eat sweets but they will eat almost anything including meats, eggs, oils and fats.

Argentine ants do not pose a health threat, but they can contaminate food. 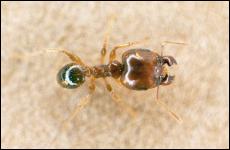 These ants get their common name from the exceptionally large head of the major workers in relation to their body size. Bigheaded ants only occasionally invade structures and usually nest in the soil surrounding structures. Most species nest in the soil in protected situations such as under stones, patio blocks, slabs, firewood, and landscape timbers, although they will nest in open areas where they make small mounds. It is not uncommon to find them nesting under leaf litter or mulch around building foundations. A few species will nest in rotting wood and stumps. With regard to structures, bigheaded ants will often nest under slabs and enter the structure via expansion joints and cracks in the slab. They will occasionally nest in crawl spaces, and are known to utilize termite-damaged wood for nesting purposes. Bigheaded ants feed primarily on seeds and insects, and occasionally on honeydew. In homes, they will feed on meats, grease, liver, molasses, peanut butter, and fruit juices. They usually show a preference for high-protein foods. 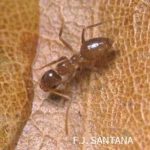 The Caribbean Crazy ant is so named because of its rapid, erratic movements. They are known to scavenge for a wide variety of solid and liquid foods, such as seeds, fruits, garbage, honeydew, and practically any household food. They are also predatory and will attack insects and other ant species. Caribbean Crazy ants will forage much more erratically than other ants and form much looser trails. Thick foraging rails with thousands of ants can be found along sidewalks, around buildings and on trees and shrubs. 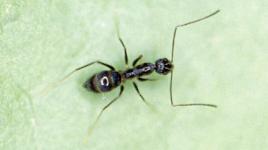 They typically nest outdoors in the soil and in the cavities of trees and shrubs, but frequently enter homes in the fall or after rain. Once inside your home, they will nest in wall and floor voids, especially near hot water pipes and heaters. Workers are omnivorous, feeding on live and dead insects, seeds, honeydew, fruits, plant sap, and many household foods. The Crazy ant is highly adaptable and can live in both very dry and moist habitats. Their colonies are often large, and can become quite large. On warm, humid evenings, large numbers of males gather outside nest entrances and may mill about excitedly. 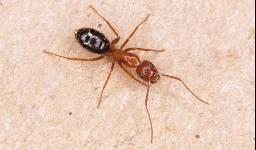 Carpenter ants nest in live and dead trees, rotting logs and stumps, porch pillars and roofs, windowsills and wood in contact with soil. They are also known to live in telephone poles and other man-made structures, and prefer to be close to food sources and safe from environmental hazards such as flooding or heat. Indoors, they tend to nest in wood, which may be softened by moisture, and in dry wall voids. Workers cut galleries and tunnels in wood, expanding the nest size for the enlarged colony. They have also been found to nest in foam insulation. The presence of 20 or more winged and/or wingless ants indoors is usually a sign of indoor infestation. Carpenter ants are omnivorous, and feed on plant juices, fresh fruits, insects (living or dead), meats, syrup, honey, jelly, sugar, grease, fat, honeydew, etc. They feed readily on termites and usually never co-exist with them in a home. 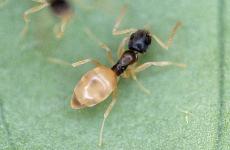 The Ghost ant is a nuisance ant that is common in central and southern Florida. It is particularly fond of nesting inside the aluminum supports around screen porches. Once inside your home, it will nest in potted plants and other moist areas, as well as wall voids or spaces between cabinetry and baseboards. Once inside, they can be seen in kitchens and bathrooms trailing to and from the sinks in search of moisture. They are fond of honeydew and are similar to Argentine ants in that they guard honeydew-producing insects. They feed on dead and live insects, but once inside they will eat anything sweet.

Pharaoh ants tend to feed on sweets, proteins and insects. They forage in set trails along carpets, countertops, cabinets, floors, and baseboards, favoring warm, moist locations in which to nest. Pharaoh ants can only survive outdoors in sub-tropical areas, where they are often found in leaf litter or rain gutter debris. Once inside, they can be found in wall and cabinets spaces, around insulation, behind baseboards and any other accessible crevices and spaces. Pharaoh ants pose a major threat due to their ability to nest indoors in almost every area of a building. They are thought to be able to transmit over a dozen pathogens.

Fire ants typically nest outdoors in dome-shaped mounds, some up to 4 inches high, or can be found next to or underneath timber, logs, rocks, pavers, bricks, etc. Mounds will not always be evident, but are usually found in open areas such as lawns, pastures, and along roadsides. Fire ants are omnivorous and will feed on almost any plant or animal matter. Workers will forage for food more than 100 feet from the colony during both the day and night. When a large food source is found, fire ants recruit other workers to help take the food back to the colony. In addition to stinging humans, fire ants can sting pets, livestock, and wildlife. Crop losses are also reported due to fire ants feeding on seedlings and even citrus trees. They will also nest in A/C units and gas and water meter boxes; electrical equipment and utility housings may serve as fire ant nest sites, sometimes resulting in short circuits. 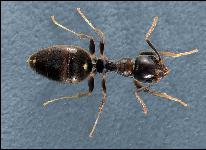 White-footed ants frequently nest outside in trees and bushes, under palm fronds and tree bark, in loose mulch, under debris and in leaf litter. Although they tend to prefer nesting outside, they can be found in wall spaces and attics and under roof shingles. Nest sites are usually close to food and moisture sources, and are often spread out as interconnected satellite colonies. It is common to find them foraging indoors for food and moisture, and outside on hedges infested with honeydew producing insects. White-footed ants are similar to Argentine Ants in that they have been known to tend or “farm” aphids and scales to obtain the honeydew they excrete. They will also feed on dead insects and other proteins.

Contact us at 786-488-7235 for a FREE Quote! Our technicians will provide you with informative procedures to better understand our Miami ants.